Is “No Known Mental Health Condition” Useful for Suicide Prevention? 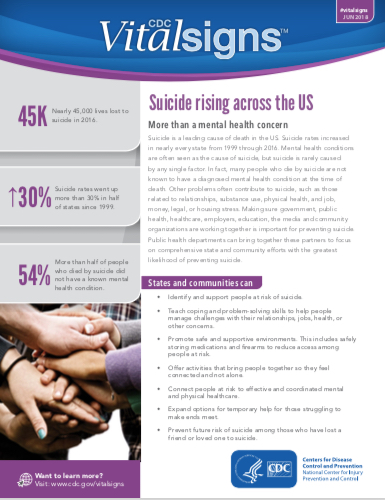 Fifty-four percent of people who died by suicide did not have a known mental health condition.

That’s a key message from the June 2018 issue of “Vital Signs,” published by the Centers for Disease Control and Prevention (download). What should we interpret this number to mean?

The Vital Signs issue notes that many factors contribute to suicide, including a relationship problem, problematic substance use, recent or upcoming crisis, or issues with physical health, employment or finances, the criminal justice system, or housing insecurity. Does using the 54% number minimize the role of mental health in attempted and completed suicides or does it merely put the suicide picture into context? Is the emphasis on other factors a good or bad message, public health-wise, for suicide prevention efforts?

Not enough people with mental health conditions are diagnosed and receive appropriate treatment. The CDC’s data, says Dr. Reilly Harrington, highlights the under-diagnosis and lack of treatment-seeking by individuals who have severe depression or are suicidal. Dr. Aaronson notes that only about half of all people with depression or bipolar disorder have ever sought treatment and, of those getting treatment, only half seem to get adequate treatment. Dr. Ackerman believes it can be assumed that many individuals who legitimately had mental health conditions were never diagnosed. All of the experts acknowledged that one of the leading barriers to treatment-seeking is the social stigma of mental health conditions.

Regarding the need to study the issues related to suicide and suicide prevention, it’s hard to know whether we are properly counting all of the deaths that should be categorized as suicides. Many advocates believe that suicide (technically, “intentional self-harm”) as the cause of death is significantly underreported. Local coroners and medical examiners are instead attributing these deaths to other causes, such as identifying them as accidental drug overdoses or motor vehicle accidents. Why is this categorization such a challenge? People who die by suicide do not always leave notes and sometimes families seek to avoid the stigma and sense of shame that can accompany a suicide death.

Dr. Ackerman asserts that we need concerted public health approaches that involve means safety (i.e., reducing access to the means by which people attempt suicide), crisis supports, awareness and education strategies, screening efforts in both mental health and medical settings, and comprehensive approaches such as Zero Suicide in health systems.

Is mental health a factor in 90% of suicides?
This figure is widely recognized yet is not without controversy. It isn’t surprising that, more often than not, a person who attempts suicide will meet the criteria for a major depressive episode at the time of their attempt. In other words, 90% of individuals upon psychological autopsy would be classified as having a diagnosable mental health condition. But Dr. Ackerman points out that there are problems with this thought process. First, psychological autopsy is not extremely reliable. Second, being suicidal dramatically increases the chances of receiving a diagnosis such as depression or bipolar disorder. In his view, this statistic is somewhat circular.

Because the 90% statistic is uncertain and malleable for different organizations’ purposes, it opens the door for more discussion of other factors that contribute to suicide attempts. Dr. Ackerman suggests that both statistics (the 54% and 90%) are probably misleading and that the truth lies somewhere in between. He summarizes: mental health conditions are a primary risk factor for suicide but many other less-recognized factors contribute to suicide risk and are often discounted to the detriment of public health efforts.

Young people are at risk
We should all be concerned that suicide is the second-leading cause of death for teens and young adults, says Dr. Aaronson, for the age groups 15-19, 20-24, and even 25-34 years old. (Also sadly, it’s the third-leading cause of death for kids aged 10-14.) The behaviors and signs of suicidal ideation for kids through young adults are not necessarily the same as for adults, so we need to have programs that equip people to understand signs of suicide risk in people of all ages and cultures. Dr. Ackerman notes that kids tend to be much more impulsive than adults and, actually, depression does not precede suicidal behavior in the majority of cases for kids under age 12.

Lessons for National Suicide Prevention Awareness Month
Medical and mental health professionals need education on suicide risk because they don’t assess it often enough. According to Dr. Ackerman, well-meaning and well-trained clinicians unfortunately believe that they should screen for depression and then, only if positive, they should screen for suicide risk. The recommendation should be to screen for both depression and suicide risk so that health providers don’t miss the 20%-30% of those who are at high risk for suicidal behavior.

We can’t expect individuals who are experiencing suicidal ideation to proactively seek support before we identify that they are at risk for suicidal behavior. It is up to healthcare systems to venture upstream and do better education, advocacy, harnessing of technology, more frequent screening, training in evidence-based approaches, and engaging all providers rather than acute care providers only.

Finally, Dr. Reilly Harrington urges people communicate about suicide. Asking someone if they are having any thoughts of suicide will not make them act to take their own lives. Rather, asking questions and engaging in open dialogue can be an enormous relief for an at-risk individual who can then seek help rather than ending their lives.

If you are feeling suicidal, take action now. Call the National Suicide Prevention Lifeline at 1-800-273-8255; text LISTEN to 741-741; call 9-1-1; or go to the nearest hospital emergency department. If someone in your life is suicidal, do not leave them alone and do support them in getting help.

Editor’s Note: The Families for Depression Awareness website has information, resources, and online tools to help families learn to reach people who are struggling before they reach a crisis point. Learn to help someone upstream; visit familyaware.org/trainings to register for upcoming webinars on helping teens and adults with depression.

Scott T. Aaronson, MD, is Director of the Department of Clinical Research Programs and Director of Transcranial Magnetic Stimulation Services at Sheppard Pratt Health System in Baltimore, MD, and is Clinical Associate Professor of Psychiatry at the University of Maryland School of Medicine.

Noreen Reilly Harrington, PhD, is staff psychologist for the Dauten Family Center for Bipolar Treatment Innovation at Massachusetts General Hospital in Boston, MA, and an Assistant Professor of Psychology at Harvard Medical School.