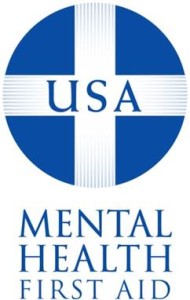 In January, legislation was introduced in both the U.S. House of Representatives and Senate to fund public education programs that train emergency services personnel, police officers, teachers/school administrators, primary care professionals, and students to identify, understand, and respond to signs of mental illnesses and substance use disorders. The legislation, referred to as The Mental Health First Aid Act, seeks $20 million in grant funding for Mental Health First Aid educational programming to:

Senator sponsor Mark Begich (D-AK) underscored the importance of the proposed legislation, saying that the bill “makes smart investments to increase awareness and resources for mental health services in Alaska and across the country. I look forward to seeing it move forward in the Senate.” He said, ”The broad bipartisan support for this bill shows that politics have no place when it comes to keeping our families and communities safe and providing adequate support for those who may be experiencing a mental health crisis.”

House sponsor, Rep. Ron Barber, a stalwart supporter of community-driven care for people with disabilities (dating back to his 32 years of public service with Arizona’s Division of Developmental Disabilities), and who was among those wounded in the shooting of then-Rep. Gabrielle Giffords in 2011, said the bill is “an important step in improving awareness and education about mental illness in our communities.”

The proposed legislation would help expand the reach of an existing and successful community-level program, Mental Health First Aid, developed in Australia and brought to the United States by the National Council for Community Behavioral Healthcare, the Maryland State Department of Health and Mental Hygiene, and the Missouri Department of Mental Health. Introduced in 2008, the 12-hour US program has reached 100,000 people in every states and has trained 3,000 people as instructors.

What Can You Do?
Find out more about the bills (S. 153 and H.R. 274) and what actions to take to support them at the National Council’s Action Center.

Your Turn
What do you think? If a teacher, an employer, a service-member, or other person in your life had been trained to recognize a mental health crisis, would you or your loved one have been able to get help sooner? Comment below to let us know!