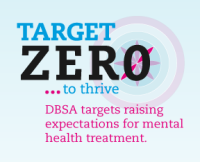 The first priority in treating a mood disorder is ensuring that the person is out of immediate crisis. But should this be the end goal? Too often researchers, providers, family members, and peers consider a stable mood as a measurement of a successful outcome.

On April 1, the Depression and Bipolar Support Alliance (DBSA) kicked off a month-long program challenging the mental health community to raise expectations from fewer symptoms to zero symptoms. “Target Zero to Thrive” is a campaign to insist on new standards for research and treatment that raise the bar from stability to lives of wellness.

Twenty-one million people in the U.S. live with mood disorders, and persisting symptoms increase the likelihood of:

According to Allen Doederlein, president of DBSA, “Living with a mood disorder can damage hope and lower expectations so a person may not expect or think they deserve a full life. We as peers, clinicians, researchers, and family need to help them expect and achieve more.”

Dr. John Greden, Executive Director of the University of Michigan Comprehensive Depression Center, wrote in a March 11, 2014 CFYM post that “We need policies that move away from short-term research grants and that support a change in approach in how we measure outcomes.”

In that same post, Greden further noted, “We treat mental health issues in an episodic way, even though we know that mood disorders are going to be with a patient for a lifetime and recur even with the best therapy.”

What is the flip-side of raised expectations? Certainly, not shame or guilt because one is experiencing residual symptoms. Rather, it is a call to the research and medical communities that we expect and demand more. Target Zero to Thrive points out how the system has failed people living with the mood disorders when they are not being given the opportunity to achieve zero symptoms—not the other way around.

Doederlein reiterates this point when he says “Believe me, I know—I know—that thriving can seem so elusive, even impossible at times. But we can’t get there if it’s not even part of the conversation.”

There are many ways to get involved in the campaign